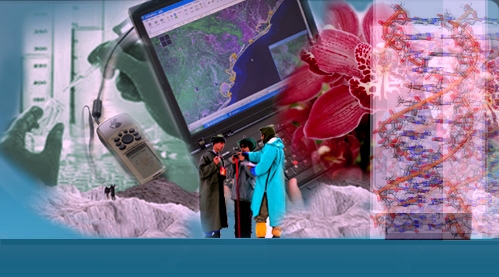 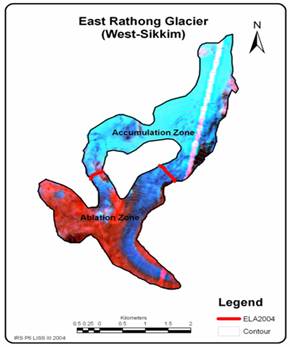 The study of Glacial Dynamics of East Rathong Glacier (ERG) started in 2012. In the first field visit, the stakes were fixed using manual method of stake fixation with the help of GI pipe in order to find out the glacier velocity and ablation pattern in non ablation period. Out of confusion in identification of snout, the team monitored the ablation pattern upto frontal area of exposed ice in ablation area of East Rathong Glacier (ERG). The stakes were fixed on an average depth 6-9 feet, but all these stakes found fallen on the surface of the glacier in next field visit in the last week of June 2013. It shows the high rate of melting in non ablation season. One stakes fixed in debris cover in the lower ablation area near the snout found intact, which signifies the low ablation rate in the debris covered area of the glacier. In this stakes, ablation of the glacier is recorded 1.78 meters in non ablation season. 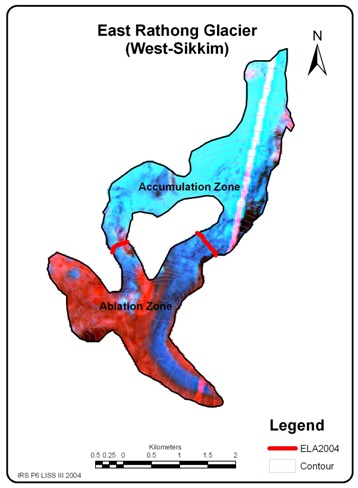 Though manual method of stake fixation did not allow us to get the concrete idea to carry out ablation pattern and velocity study, but it shows the high rate of melting in ERG. The study team calculates the ablation of more than 2 meter thickness. The study also suggests the need of steam drilling machine for further studies in ERG.

In pre ablation season of 2013, due to the non availability of steam drilling machine with the centre, we decided to use the stakes fixed with steam drilling machine by TERI, Delhi in order to study the ablation pattern and glacier velocity. Due to vastness of the glacier the study team not able to find out some stakes in crevasses prone areas of the glacier. The ablation study shows very high rate of melting in the last ablation season. Within three months, the melting recorded from 2.30 meters to 3.86 meters.

In terms of glacier velocity study, the movement of the glacier found around 2.42 meters to 8.56 meters in three months. Complete figure of velocity study will be available in next ablation season. The stake monitoring was done with the help of Topcon DGPS, so high accuracy was insured. Snout monitoring is one of the important parts of glacier dynamic study. The study team encounters lot of confusion in identification of snout of ERG due to the presence of huge seracs and debris cover. Finally, the study team identified the proper snout of the glacier with intense survey of the glacier surface. In last ablation season snout of ERG were marked using DGPS at an elevation of 4678 meters.

The team successfully carried out the Hydrology study of the glacier in terms of Discharge measurement and suspended sediment load studies in last ablation season from July to September 2013. Besides these studies, important aspects of meteorological studies, such as daily temperature and humidity, rainfall, wind direction were recorded with the help of manual meteorological instrument. The study team also completed survey of accessible areas of glacier using Total Station with contour interval of 1 meter which is first kind of survey in glacier area in Sikkim. Chemical analysis of water also done at the end of last ablation season.
Apart from above field studies, Centre is working on various aspect of ERG, such as fluctuation of frontal part of the glacier using temporal satellite images from the period between 1976 and present, snow monitoring of catchment area of the glacier and Sikkim, Inventory mapping of Glaciers of Sikkim using satellite images etc.